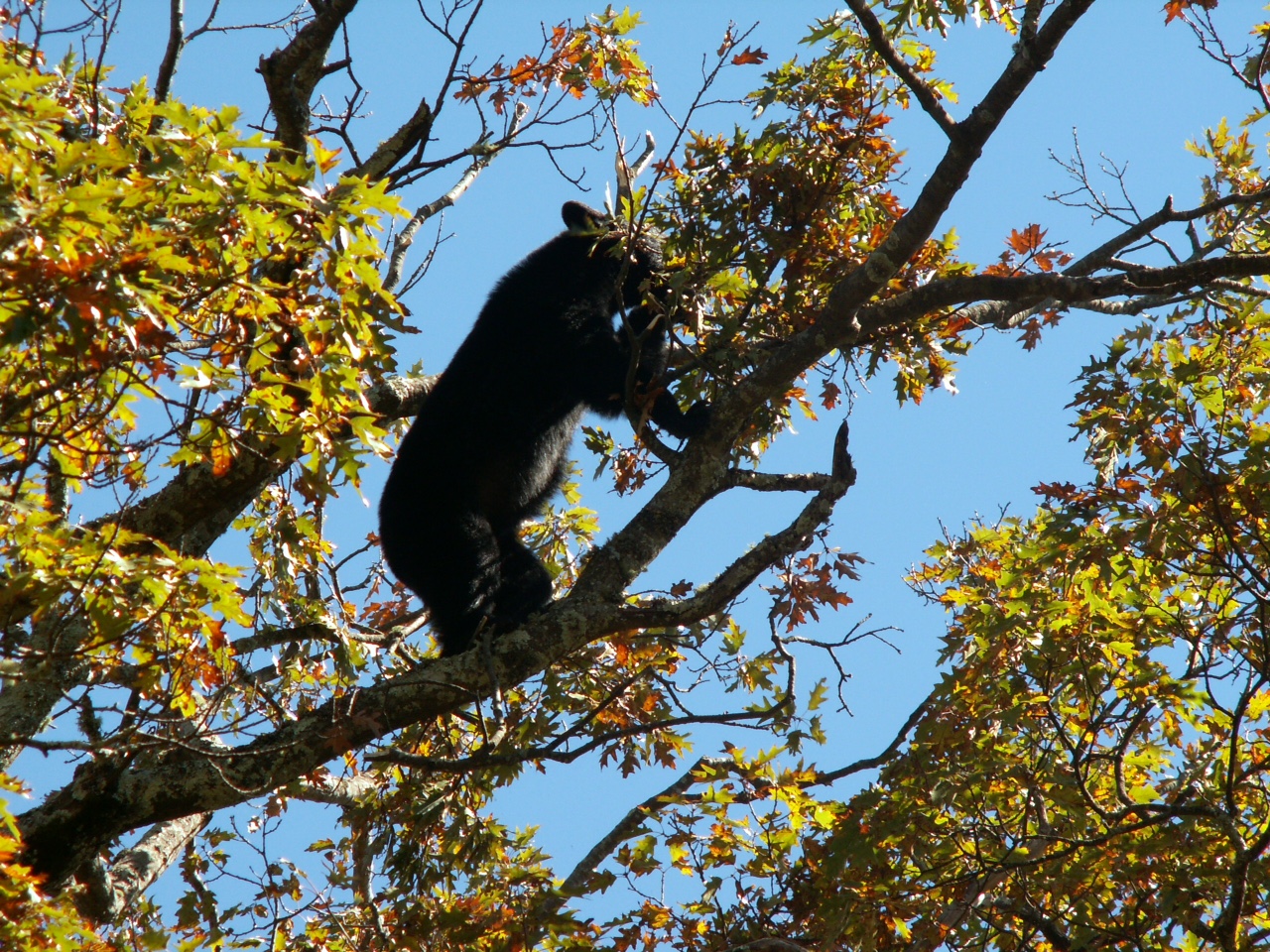 Fall is an important time of year for black bears in the Great Smoky Mountains National Park to be eating.

“This is the time they fatten up and get ready for hibernating,” said Bill Stiver, GSMNP Supervisory Wildlife Biologist. “This is a critical time for female bears to put on enough weight for having cubs.”

When you see a female bear in the summer with cubs, she weighs about 100 pounds, Stiver explained. If fall foods are abundant, that same bear will weigh 75 to 100 pounds more by the time she starts hibernation for the winter.

“She can double her weight,” Stiver said.

What bears like to eat to gain all that weight are acorns. (The photo at the top of this post is of a bear eating acorns in a white oak.)

“Acorns are the most important food for bears in the fall,” Stiver said.

But the acorn crop this fall is “spotty.”

The crop isn’t a failure like it was in 2015, Stiver said, but it’s not a bumper crop. The bears prefer white oak acorns but some of the white oak groves, such as those in Cades Cove, aren’t producing many acorns this fall.

The lack of white acorns in one grove moves more bears into other locations where white oak trees are producing acorns and to other kinds of trees that produce nuts, such as red oaks and hickory trees.

Bears often will travel miles to reach trees with nuts.

Stiver said during the fall 2015 food shortage, seven bears were feeding on one hickory tree along Hyatt Lane in Cades Cove.

Story of mother bear and her two cubs

One of the bears was a mother bear and two cubs. The bear had a GPS tracking collar that the park used to collect data on the bear population, so the biologists were able to determine the bear’s travel.

“The mother bear teaches cubs where food sources are,” Stiver said. “Years later, the grown cubs may return to those locations.”

One white oak grove that is producing acorns this fall is near a roadway and has drawn many bears.

“With the bears congregating in that area, we have a traffic issue,” Stiver said.

Drivers frequently stop in the road to watch the bears feed. In some cases, they get out of their cars and approach the bears to take photos.

Illegal to approach bears within 50 yards

Willfully approaching within 50 yards of a bear is illegal and will lead to a fine, he explained. It can cause problems for the bears that visitors don’t recognize, Stiver said.

“The bears are so focused on eating that they are often oblivious to what’s happening around them until people are extremely close,” Stiver said.

People coming near the bears can disrupt them from eating or scare them away from an important feeding area. It also puts people at risk as the bear could act defensively of such an important food source.

“People are only thinking of their personal satisfaction right then – getting their picture,” Stiver said. “You’re harassing the animal and it needs to focus on eating,”

Another problem people create for bears is not properly disposing of their trash. Food scraps left in a picnic area or at a campsite can lead, over time, to a bear eventually tearing into a tent or breaking into cars or homes for food, Stiver said.

“We want people to see and view the bears,” Stiver said. “But we want them to do that from a safe distance and allow bears to be able to feed naturally during this critical time of year.”

These collars will be used when DNA analysis is needed to track bears suspected of a bear attack or other significant human/bear interaction while we wait on confirmation of matches between the attack and the suspect bear.

You can make a donation toward to the bear management program or other FOTS initiatives to support GSMNP.