Watching Hurricane Sandy hit the northeast made me start thinking just how much we, as a society, take for granted.

That really hit home recently when I was hiking in the Great Smoky Mountains National Park.

My husband Rob and I were hiking the Chimney Tops, a trail he had done countless times as a young boy growing up in the park, and one of the few I had never hiked. 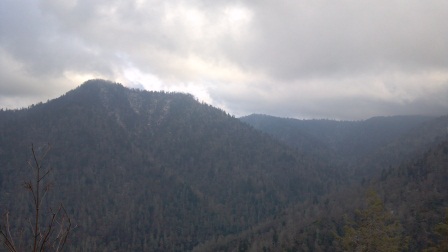 We chose it because Rob wanted to show me the incredible rock face that sat at the top of this trail.

Rob remembers his father, now 92, walking confidently across the rock face with each and grace, while others, struck with fear, got down on hands and knees and crawled their way to the incredible views. (A bit of an exaggeration, but remember these were a young boys memories of his father.)

Now as Friends of the park, we knew the Chimney Tops trail was part of the reconstruction efforts of the Trails Forever Campaign, and had seen pictures of the work that had been done in phase one of this three phase project.

However, nothing could have prepared us for the incredible efforts and impact this program is having on the trails in the park.

As we hiked easily through the lower part (phase 1) where the reconstruction is complete, we were talking and laughing and truly taking for granted how much hard work had gone into the beautiful bridges, stone steps, and trail support to make the first part of this steep hike almost effortless. [The photo at the top of the blog post is of me on one of the sets of stone steps the Trails Forever crew installed.]

As we made the first turn, into the last steep mile, all that changed.

With phase one complete, and phase two not scheduled to begin until April of 2013, and phase three still set to be scheduled, we realized quickly, as did everyone else on the trail, just how critical The Trails Forever Campaign is to the future of this park, and the sheer joy and pleasure we all receive from hiking the numerous trails.

While phase one was easy and safe to navigate, phase two and three were a strong reminder of what the entire trail used to be like. As phase one ended with its fantastic support and well marked paths, it gave way to a path that was hard to see, hard to navigate due to heavy mud and slick rocks, and one that was heavily eroded. It made us realize that left untouched, it would certainly, in a few years,  be one that no one could hike.

Now think about that, the Chimney Tops, one of the most popular hikes, due to its amazing rock face and even more spectacular views, unhikable, simply because there was not enough money or volunteers to maintain the trail.

As we enjoyed the view, Rob talked about how good it felt to be back at the top of the Chimneys and the wonderful memories just being there brought back from his childhood and at time when his father was young and strong.

Yes, while my husband and I still take a lot in our life for granted, you can rest assured we will not take for granted the value and importance of the Trails Forever Campaign and the impact it is having on our lives as hikers, lovers and supporters of the Great Smoky Mountains National Park.