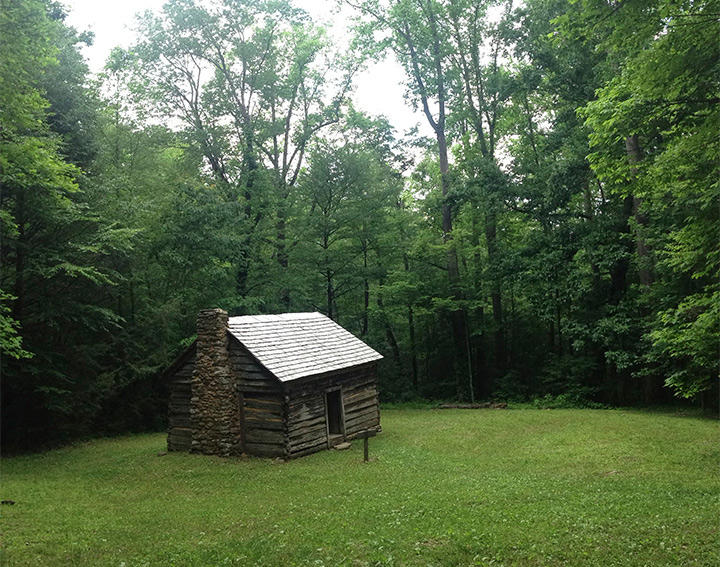 by Julie Dodd and Holly Scott

The Maddron Bald Trail was built by the Civilian Conservation Corps. Photo by Julie Dodd

Holly: The July 4th holiday is always a very busy time here in the foothills of Great Smoky Mountains National Park, so this seems like a good time to share a lesser-used trail for anyone who is looking to escape the peak visitation in Cades Cove and enjoy the beauty of our nation’s most visited national park with a hike in the Smokies. My pal Julie and I scouted this route in early June on a weekday.

Holly: To prepare for the hike, which I had done once before with family, I pulled out my trusty “little brown book” (Hiking Trails of the Smokies) to re-familiarize myself with the Maddron Bald Trail and what to expect. I wanted to be sure that the round-trip distance was realistic for the time that we had available. I noted on the elevation grid that the trail steadily climbed for 3.2 miles or so from the trailhead to the junction with the Albright Grove Loop; it gains about 1500′ over that distance, making for good exercise without interfering completely with plans to chat along the way.

The Maddron Bald Trail’s notoriety comes from the Albright Grove which is one of the rare remaining stands of old growth forest on the Tennessee side of Great Smoky Mountains National Park.

Julie: The trail lets you have that “alone with Nature” feeling, as there are few hikers on the trail. Unlike Laurel Falls or Alum Cave Bluff trails that have an almost steady stream of hikers, the Maddron Bald Trail is more remote – with only a four-car parking area – and has very few hikers. During our about 7-mile hike, we saw only seven other hikers.

The Baxter Cabin, built in 1889 as a wedding present for Willis Baxter’s son, is a reminder of how self-reliant people were who lived in the area before the Great Smoky Mountains National Park was established. Photo by Julie Dodd

The hike is a reminder of different stages in the life of the Smokies.

Walking on Maddron Bald Trail, we came to the Baxter Cabin, built in 1889 by Willis Baxter as a wedding present for his son. The one-room cabin was built from one chestnut tree.  The cabin was a reminder of the people who lived in the area before the national park was created.

The Maddron Bald Trail was built in the 1930s by the Civilian Conservation Corps, which had a camp near the trailhead. The trail is wide enough in many sections to walk two abreast.

Albright Grove Loop is one of the areas in the park that wasn’t logged in the time before the Great Smoky Mountains National Park was established in 1940. The loop is named for Horace Albright, the second director of the National Park Service. The grove includes some big trees – tuliptrees and Eastern hemlocks. We ate lunch sitting on the trunk of a large fallen tree. One large tuliptree in Albright Grove was a reminder of the giant trees that once were part of the Smokies. The top of the tree was broken off, but the tree was still massive.

Holly: We did this hike as an out and back from the Maddron Bald Trailhead. We started about 10:30 a.m. and were off trail by 3:00 p.m. with a generous stop for lunch and a few stops to point and chat.

My observation the first time that I did this hike was that once turning off Highway 321 in Gatlinburg to the trailhead parking area, it does not seem like there is a park entrance nearby. There are permanent residences and overnight vacation rentals alongside the road. On my first trip there, I drove right past the trailhead, which is on the left. Drive slowly and watch for the signs.

Reaching Albright Grove Loop requires hiking about 2.9 miles of the Maddron Bald Trail. A sign marks the loop. The loop is about 0.7 miles and is a narrow trail with the last section being a little steep.

For more details about the Albright Grove Loop and the Maddron Bald Trail, see Hiking Trails of the Smokies (The Little Brown Book).