In June of 2012 a unique and profitable partnership debuted in the form of an East Tennessee muscadine wine called ‘Dance of the Firefly.’

For the first time in its 19-year history, Friends of the Smokies had its own wine. Gatlinburg winery Sugarland Cellars had 1,000 bottles of this new creation to sell, and they committed to giving $5 from each bottle back for the benefit of Great Smoky Mountains National Park. Everyone involved was cautiously optimistic.

It all got started when Friends of the Smokies board member Jim Ogle brought the idea to the table. Local businessman Don Collier of Collier Wineries saw a natural fit between Sugarland Cellars, located near the last stoplight on the Parkway in Gatlinburg before you enter the national park; Friends of the Smokies whose mission is to preserve and protect Great Smoky Mountains National Park; and Robert Tino, whose renowned Smoky Mountain landscapes and black bear paintings capture the essence of what’s beloved about America’s most-visited national park.

Robert would create the label images and sell matching tiles; Sugarland Cellars would bottle the wines; and Friends of the Smokies would have an additional $5,000 each season to help take care of important park needs.

The promotion has been an enormous success, with $30,000 raised to-date for Great Smoky Mountains National Park. A new wine label debuts each season, and each wine has disappeared from Sugarlands’ shelves in a matter of weeks. With the seventh release scheduled to appear just in time for the holidays, here is a look back at the highly collectible wine label images that have done so much good for Great Smoky Mountains National Park.

I spoke with Robert Tino about the inspiration behind each creation. 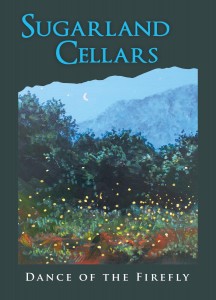 “Colors, not words, are my thing,” explained Robert Tino as he thought back about the first label he created for Friends of the Smokies.

“Sugarland Cellars wanted to celebrate that time of year when the sychronized fireflies appear in those meadows at Elkmont. That just takes you back to being a kid. Fireflies are one of the coolest things about summer. They’re nature’s light.”

While no bottles of the initial wine release are available for purchase, ceramic art tiles of  this image can be purchased at the Robert A. Tino Gallery in Sevierville

“This is the Alum Cave Trail to Mt. LeConte. It shows a peaceful walk in the woods, and you’re walking toward the light. I don’t know whether that’s symbolic or not,” Robert said.

Autumn Path 2012 sold completely out in a matter of weeks, but the art tiles are still available at the Robert A. Tino Gallery. 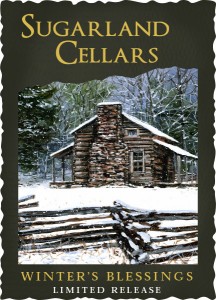 Robert Tino described the uniqueness of this label image: “This is the only winter scene I’ve ever done in the mountains capturing the majesty of the winter wonderland of the high country snow.”

Art tiles, but not the wine, are still available. Purchase yours at the Robert A. Tino Gallery.

Robert Tino is well known for his bears. He said that people send him bear photos all of the time. He has hundreds of them.

However, it is not uncommon for him to be able to paint directly from his own photographs of bears. He sees them a lot in the Smokies. The bear cub on the Sunny Days label has a nice, happy expression as he walks through spring wildflowers.

“The bears are self-portraits, and they represent the emotions I am feeling at the time I paint ’em,” he explained.

Sunny Days was the first sparkling wine released in the series. It was a bubbly Riesling. Both the wine and the art tiles sold rapidly, and no stock remains on either product. 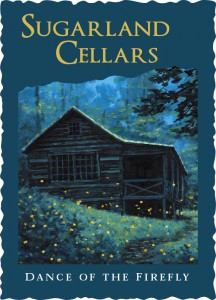 “With this one, I was introduced to somewhere in the Smokies I’d never been,” says Robert. “And the thing that fascinated me most about this place is it once belonged to an artist.”

Robert is referring to Avent Cabin in Elkmont, the former studio of Mayna Treanor Avent, located off of the Jakes Creek Trail. I spoke to her granddaughter Mayna Avent Nance about her family’s history there.

She painted a picture for me, so to speak, of a time when the trail there was a railroad spur, and the community surrounding it bustled with the farming activities of many people who owned cabins and tended cornfields and apple orchards.

Mayna Treanor Avent was born in 1868 in Nashville and received her education in Cincinnati and the Academie Julien in Paris, France. She is a renowned southern artist whose work appears in the Smithsonian Institute’s National Portrait Gallery. Along with her husband Frank, Mayna Treanor Avent purchased the log cabin that became her art studio in 1918. The cabin was originally built in 1845.

She painted in the cabin for 20 years. The Avent family’s genealogical website says, “Ownership of the cabin and its 18.5 acres was transferred to the National Park Service in 1932. A lifetime lease was given to [her son] James Avent and his wife Jeannette. He subsequently transferred the lease to his children, Jacqueline and James Avent, Jr.” That lease expired in 1992.

The Avent family’s struggle to list the cabin on the National Register of Historic Places ended successfully in 1994. Her granddaughter, Mayna Avent Nance, recalled wistfully the summers she spent there in Elkmont, “I mourn to this day that I still cannot sleep on the porch.”

Although, like the synchronized fireflies for which the wine is named, Dance of the Firefly is now gone in bottled form, the tiles and prints are still available from the Robert A. Tino Gallery. 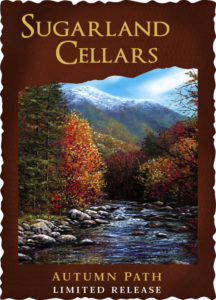 Robert painted this one of Greenbrier Pinnacle in Great Smoky Mountains National Park. He described the scene, “When the seasons mix like that, it’s just neat to see.”

Both the wine and the tile are still available! Come join us at the Robert A. Tino Gallery on Saturday, December 7th for the debut of 2013’s version of Winter’s Blessings. Add both Autumn Path and Winter’s Blessings to your collection. Pair bottles with art tiles (or even prints) for a special holiday gift for yourself or someone you love. 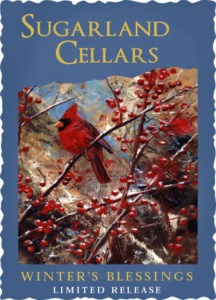 #7 – Winter’s Blessings 2013 – the latest partnership release by Sugarland Cellars + Robert A. Tino to benefit Friends of the Smokies

To celebrate the debut of the lucky #7 wine in this amazingly successful series there will be a release party at the Robert A. Tino Gallery in Sevierville on Saturday, December 7th from 10 a.m. to 5 p.m. Come taste and buy Sugarland Cellars’ wines, including this year’s Autumn Path  and the brand newly released Winter’s Blessings. Once again, the featured wine in the bottle will be a spiced cherry port, just perfect for mulling for holiday parties and open houses, or for giving as a host/hostess gift.

Robert spoke of his inspiration for the label art, “Red birds are kinda special. We have them at the house and at the gallery, and they just make me think of winter. This is the most popular bird print I’ve ever painted, and it’s one of the most popular of my prints overall. People just love this one for the holidays.”

Shop Online for wines and Robert A. Tino art tiles

You can purchase Autumn Path online through the Sugarland Cellars website. Art tiles are available at the Robert A. Tino Gallery; the 6″ x 8″ tiles are $38 and the 8″ x 10″ tiles are $48.