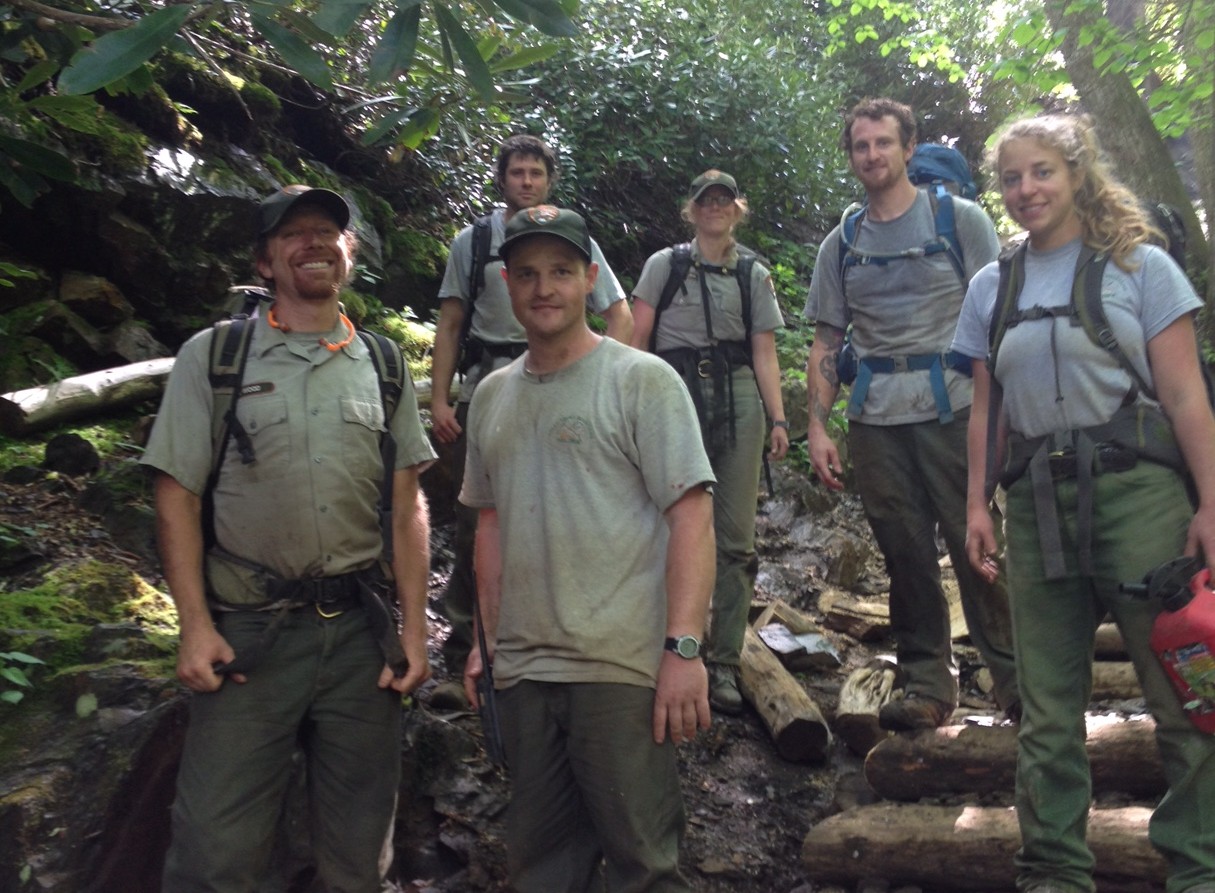 By Holly Scott Jones, former Marketing Director of Friends of the Smokies

A Brief Look Back at Smokies Trails Forever Beginnings

Throughout my eleven-year career with Friends of the Smokies, there were some definite highlights, and by that I mean some really important and impressive things that Great Smoky Mountains National Park’s leadership asked the organization to make happen with much-needed funding.

The accomplishment which stands out in my mind as the single best example of what amazing things are possible when people join together to help Great Smoky Mountains National Park is the Trails Forever program. It started in 2008 with a $2.3 million challenge grant from the Aslan Foundation of Knoxville and a desire to create a legacy project for the Park’s 75th anniversary celebration.

If Friends of the Smokies could galvanize enough support to match Aslan’s gift from people who love hiking in the Smokies, then an endowment to care for the Park’s 900+ miles of hiking trails could be established in perpetuity.

Boots on the Ground

Friends of the Smokies raises money to help the Park. That’s what we do. Sometimes we are able to get out of the office and into the Park to see what our members and supporters are making possible. As Marketing Director, my job was to communicate the impact of our collective support to people through newsletters and electronic media using photos and words which often meant that I was in front of a computer rather than in the woods.

Before rock work on a section of the Forney Ridge Trail

So for six years, I talked about and wrote about the Trails Forever program and the Trails Forever crew. I saw photos and PowerPoint presentations filled with statistics about #’s of miles of trail improved, #’s of pounds of rock used in trail construction, images of mules toting locust timbers, and volunteers and crew members breaking boulders with hand tools. I even hiked several of the trails and ooh’d and aaah’d about the improvements to iconic routes like Ramsey Cascades and Forney Ridge.

The same section of trail on Forney Ridge, after improvements by the Trails Forever crew

Finally this year I decided to experience it for myself. The crew offers volunteer opportunities to work alongside them. On Wednesdays from June through October anyone can register at least one week ahead of time to work on the Chimney Tops Trail and help make a difference.

So, my friend Sam McGroom and I picked a Wednesday in early June, and we did it.

Both of us had some previous trail maintenance experience, so we donned our work gloves and gaiters and met the crew members at 8:00 a.m. in the Chimney Tops Trailhead parking area. We jumped out of the car ready to work, but Josh Shapiro, the crew leader, slowed our roll for a safety talk and 15 minutes of stretching. We got hard hats, ear plugs, safety goggles and instructions about what to expect, then we set out on the 1.2 mile hike up to the work area, passing over sections of completed Trails Forever work. Immediately I realized that this was not the Chimney Tops Trail that I remembered. Gone were the roots and unwelcoming trail tread. The vertical gain remains daunting- it is still Chimney Tops after all- but the enjoyment of hiking it was exponentially multiplied by the crew’s efforts.

Trails Forever Rock Stars and the Stairway to Heaven

Our first assignment was to disguise a section of old, sloping eroded trail with vegetation; its replacement is a new durable trail surface built out of locust timbers. More than 133 box steps rise uphill for about 0.2 mile, which we declared to be the ‘Stairway to Heaven’. Humans will avoid steps if at all possible, so rather than using the new staircase, hikers had been tackling the steep uphill section the way they had done in the past along the rooted and rocky old path. Josh instructed us in the fine art of collecting native plants such as umbrella leaf, rhododendron, and stinging nettle for replanting in the area of impact. Sam and I worked with another Trails Forever volunteer named Jim Rugh on the revegetation project for most of the morning, with continued instruction and assistance from Josh and Trails Forever crew member Trey Coyle.

The day was warm, and the stinging nettle stung, but we worked hard. We landscaped the short section of trail with pride and enthusiasm. Sam made it her personal mission to find some nice young rhododendron saplings to root in the soil.

This photo looks hazy because my phone was actually misty with my own perspiration- YUK!

Uphill from us we could hear the action of Margaret Milikin and Kelly Grzasko as they used a rock drill to position feathers and wedges into giant slabs of granite with the goal of entertaining us after lunch with a rock-breaking demonstration. I actually captured ten minutes of video footage of Margaret and Kelly swinging sledgehammers to split these boulders into smaller pieces to be set into the trail as steps, but both young women asked me not to post it on the internet. I cannot imagine why they would not want the whole world to see how incredibly strong and capable they are. We deemed them the “Rock Stars”, and I was a little starstruck, I have to admit. I was absolutely in awe of their determination, and the fact that they do this kind of work four days a week, every week, from May through October.

After lunch we headed back downhill and I got a lesson in making crush fill with a rock hammer which was something I had heard about but had no idea how it actually worked. Now this was fun! Taking dinner plate sized pieces of rock and whacking them into smaller bits to fill in the locust steps was an incredible stress reliever. Bang! Bang! Bang! I highly recommend this activity for anyone who is carrying around some tension.

Several yards away, master carpenters Eric Wood and Jeff Fraysier made miter cuts in a particularly tricky bit of step building, and as they used the chainsaw, we were thankful for our earplugs and safety glasses. We had been wearing our safety equipment all day. At first the goggles and hard hat made the work more awkward and sweaty, but by day’s end I forgot I had it on.

Eric, at left, and Jeff

The hike out was a treat as Sam and I had gained a more solid understanding of the time and intensity of the effort required to make a new log step or set a rock into the trail. It was like hiking with the CCC master craftsmen who built the trails in the Smokies back in the early part of the 20th century. Of course back then, none of them were young women in their twenties. That day I felt I was truly part of Trails Forever. I made a difference. I could see it from start to finish. It stands out as perhaps the most memorable day in my eleven year career with Friends of the Smokies.

If you have a free Wednesday coming up, and if you are physically capable of safely making the hike, and if you can then work alongside the crew for 8 hours, sign up to help. You will meet some of the most impressive people, and you will appreciate hiking in a whole new way.