For the 25th year running, Friends of the Smokies, an official nonprofit partner of the National Park Service, will host the Friends Across the Mountains Telethon to raise money for Great Smoky Mountains National Park (GSMNP).

Join us for our annual telethon on Wednesday, Aug. 14, 7-8pm ET as we celebrate ’25 Years of Making the Call.’ 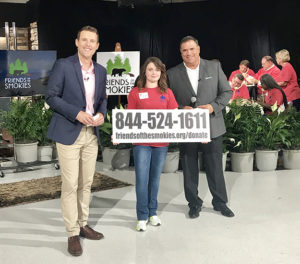 The live televised event, airing on WBIR in Knoxville and WLOS in Asheville, will help fund the park’s emergency communications system upgrade. We’ve set a goal to raise $250K to commemorate the telethon’s 25th anniversary.

Donations collected Wednesday night will be used towards Friends of the Smokies’ 25th Anniversary Signature Project: a capital campaign to upgrade the park’s emergency radio communications system. The $2.5 million effort will leverage $1.25 million in federal funds and grants to match every donation made to Friends of the Smokies. The state- of-the-art radio upgrades will allow rangers to respond more quickly and effectively to emergency situations in the park, keep more than 11 million annual visitors safe, and communicate with emergency services in surrounding communities.

Friends of the Smokies is an official nonprofit partner of Great Smoky Mountains National Park and has raised $62 million to support critical park programs and maintain the Smokies as a crown jewel of the National Park Service.