The first stage of the restoration of Trillium Gap Trail, one of the most popular GSMNP trails, has wrapped up for the season with major improvements made from the trailhead to Grotto Falls.

The last day of trail work for this season was Nov. 14. Trillium Gap Trail is open now every day until the second stage of the trail restoration begins in the Spring of 2020. 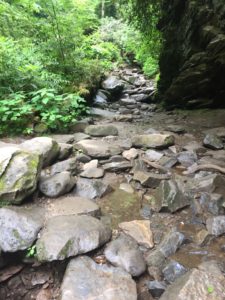 Compare this section of Trillium Gap Trail before restoration work with the after photo at the top of the blog. All photos by Josh Shapiro, NPS

I asked Josh Shapiro, the crew supervisor, about this year’s restoration work on Trillium Gap Trail.

FOTS: What are some of the trail improvements made on Trillium Gap Trail?

Josh Shapiro: Starting at the parking area and working our way up the trail, the crew has improved the trail surface by removing rocks and roots, building new drains, improving existing drains, covering up short cuts, and widening the trail in narrow areas. 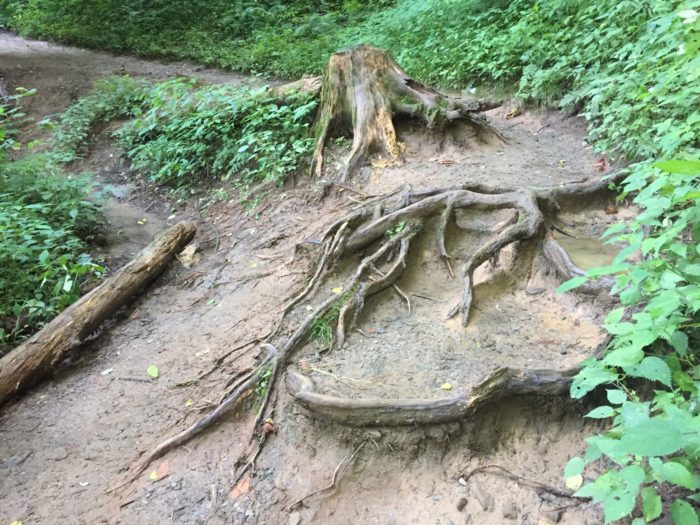 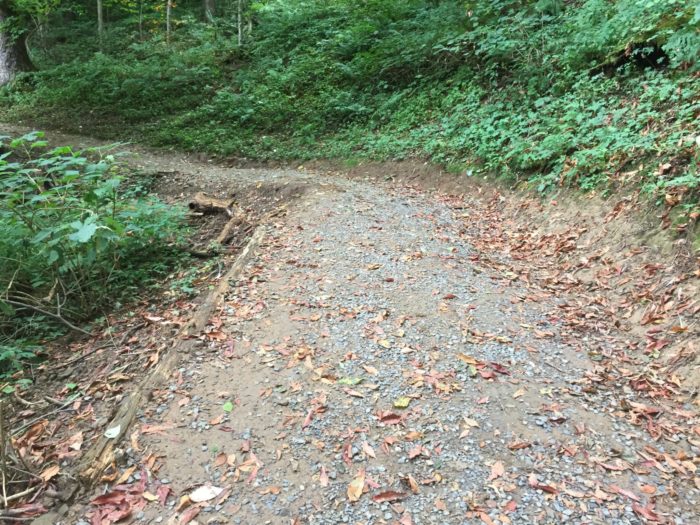 Sections of the trail that needed more attention required the addition of trail structures.

We would prefer to repair the entire trail by improving the trail surface and improving drainage. However, if the trail grade is too steep and/or erosion can’t be mitigated by drainages alone, structures such as staircases and turnpikes with attached water bars were needed.

The crew finished work from the parking area to Grotto Falls.  Next season the section up to and at Grotto Falls will be open. The trail closure (from Monday-Thursday) will be from above the falls to Mt. Le Conte.

FOTS: I’m always amazed at the amount of material that is needed for the trail work. What materials have been used for the Trillium Gap restoration and how are materials transported to the trail locations?

Josh Shapiro: Our first choice of material to build trail structures is always stone. Stone blends in best with the natural landscape and will stand the test of time.

All of the stone was gathered on site from the existing trail corridor.

All of the stone structures are built without mortar and built to mimic the work of the CCC (Civilian Conservation Corps) of the 1930’s.

Stone typically weighs approximately 180 – 200 pounds per cubic foot. A typical stone step measures 2 to 4 cubic feet in size and weighs from 375 to 750 pounds. 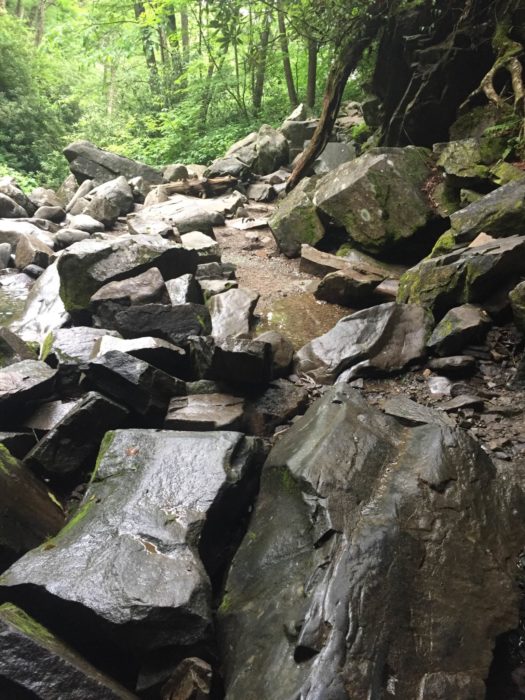 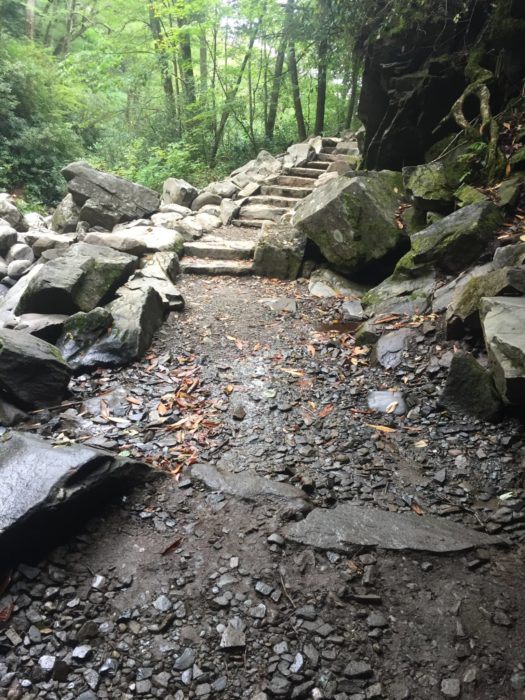 When stone isn’t available, we use black locust logs to build trail structures.

Black locust is the most rot resistant form of timber that we have available. Black locust is known to last decades before showing significant signs of decay.

This season we had 8-foot-long locust logs delivered to the trailhead and utilized the Park Mule Team to transport the locust logs to different staging areas along the lower 1.2 miles of the trail.

FOTS: How many worked on the Trails Forever crew and the ACE crew?

Josh Shapiro: Nine worked on the NPS Crew. Everyone had worked on the Rainbow Falls Trail restoration. Four worked on Alum Cave Trail, three on Chimney Tops Trail, and one on Forney Ridge Trail. 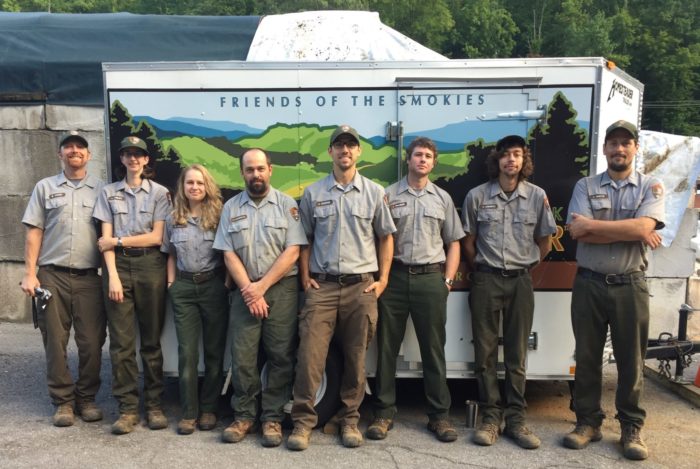 Eight worked on the ACE (American Conservation Experience) Crew. The NPS Crew trained the ACE Crew in masonry, trail surface repair, rigging, and trail design. Some of them had past experience and some had very little. 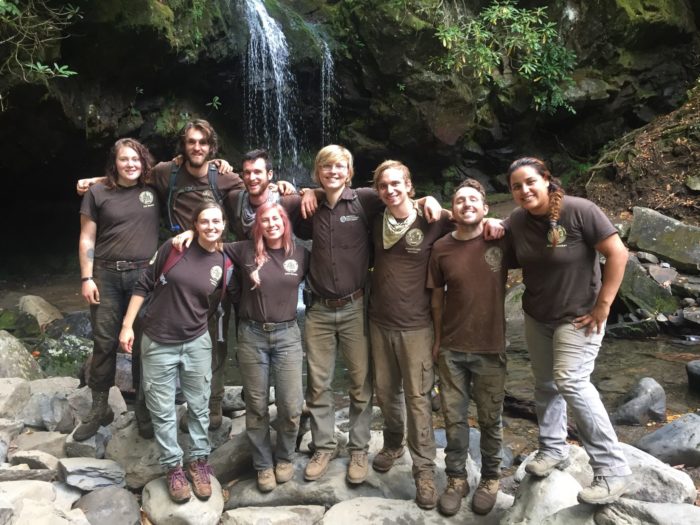 FOTS: Haven’t you worked on all the Trails Forever restoration projects in GSMNP?

FOTS: What was the role of volunteers in the trail restoration?

Josh Shapiro: Volunteers have always had a vital role in assisting the NPS Crew on Trails Forever Trail rehabilitation projects.

This year volunteers worked 387 hours on the trail! We’ve been fortunate to have many returning volunteers and volunteer groups.

One of the major volunteer projects this year was to cut back vegetation that had overgrown the trail and was impeding the llama team and hikers. 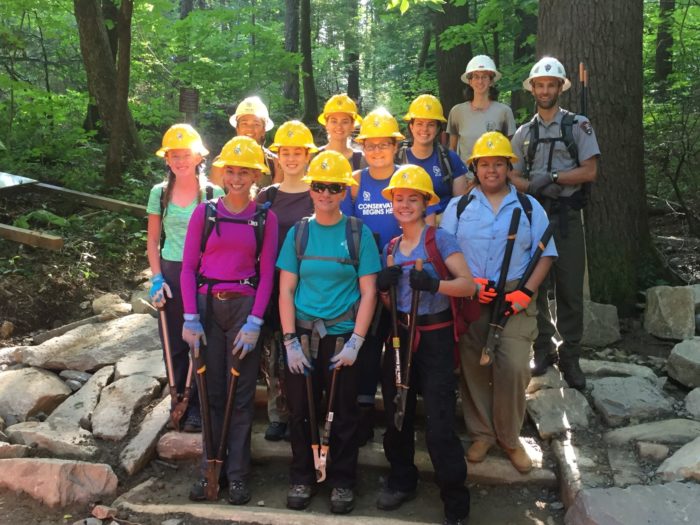 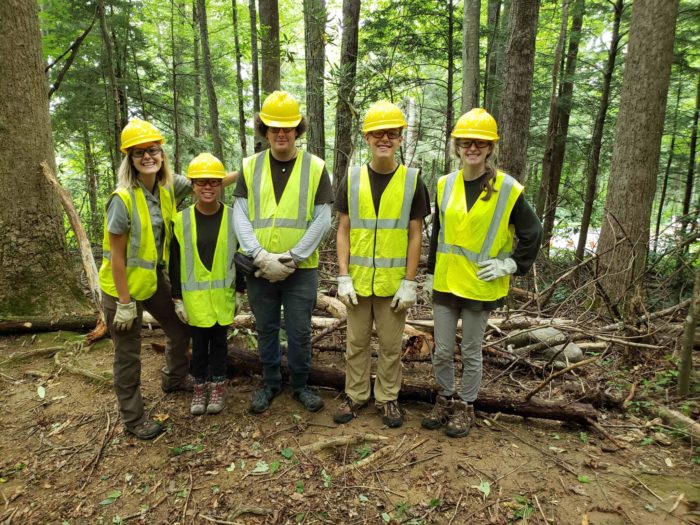 Volunteers cut back vegetation from the beginning of the trail all the way up to Trillium Gap (2.8 miles)!