This Saturday, join the Firefly Celebration, a combination of Robert A. Tino’s artwork and Sugarland Cellars Dance of the Firefly limited release wine to raise funds for Friends of the Smokies. Stop by anytime between 10 a.m.-4 p.m.

The celebration will be held at the Robert A. Tino Gallery, located at 812 Old Douglas Dam Road, Sevierville.

The Firefly Celebration, in its eighth year, is the launch of Dance of the Firefly, a limited release Sugarland Cellars wine, featuring a firefly art label painted by Robert Tino. This year’s art label is “Summer Moon.”

Dance of the Firefly wine will be sold for $20 per bottle, with all the proceeds going to Friends of the Smokies.

In the last seven years, the sale of Dance of the Firefly wine has raised more than $140,000 for FOTS.

During the Firefly Celebration at the gallery, visitors will be able to view and purchase Robert’s artwork, including prints and art tiles of “Summer Moon” and his previous Dance of the Firefly art.

“Almost everything is going to be outside – wine sales and art,” Mary John said. In previous years, the event has been held in the gallery, but the activities will be held outside on the grounds of the gallery to allow for social distancing due to Covid-19.

“It’s like you’re visiting somebody’s home and having a party in the yard,” Mary John said, describing what the day will be like. “Because of the virus, we’ve had to make changes to create something that’s fun and more of a summertime event.”

This year’s Dance of the Firefly label is “Summer Moon,” with a moon above a barn and fireflies dancing in the sky above a pond. 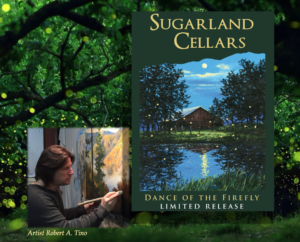 “The barn is right across from the gallery. Last night, that summer moon was right over the barn, just like the label,” Mary John said.

“Lots of people have Robert sign the label and then they save and collect the bottles each year,” she said.

The firefly painting also is printed as an art tile each year. Mary John said people like to collect the art tiles, often purchasing a bottle of the wine and an art tile.

Prints of “Summer Moon” will be available in giclée canvas or watercolor, from $60 to $175. “Summer Moon” and all previous firefly prints will be 15% off, framed and unframed, only at this event.

“Any time you’re involved with a Friends of the Smokies event, you just feel like you are a part of something so much larger and that impacts the park,” Mary John said in discussing the enthusiasm she and Robert have for the annual Firefly Event.

“Add up all those $20 bottles of wine, and the event has been a phenomenal success. People can enjoy a bottle of wine and make a small contribution that becomes a large contribution. People enjoy being a part of that. It’s a great way to have people who don’t know about Friends become a part of Friends due to Robert’s art,” Mary John said.

“The park is our past, it’s our present, and it’s our future. By contributing to our national park, we can be part of that something bigger. We’re helping the park be part of the lives of future generations,” she said.

Origin of Dance of the Firefly

The origin of the Dance of the Firefly wine started in 2012 when a partnership was created with FOTS, Sugarland Cellars and Robert Tino to create four seasonal limited release wines with Robert’s images as art labels.

Among the paintings Robert shared as possibilities for the labels for that first year was a firefly painting he recently had completed.

The group discussed how special the synchronous fireflies were to the park and selected Robert’s firefly painting for the label for the June wine release – calling it “Dance of the Firefly.”

“Everybody loved the firefly label,” Mary John said. “The next year, they said, ‘Can you do another firefly?’ After that, it just became that June’s label always is a firefly.”

“The Dance of the Firefly is a great partnership,” Jonathan said, explaining the opportunities the event offers for FOTS, Robert and Sugarland Cellars.

“We have Robert Tino fans and Friends of the Smokies fans that become life-long supporters of us, too,” Jonathan said. “It’s a triple win.”

Sugarland Cellars opened in 2010 and primarily uses fruit from 40 Tennessee farmers for the wines they make.

The Dance of the Firefly wine is similar each June but not exactly the same, as the wine depends on the fruit harvested each year.

“We’re very happy that from the beginning we’ve been able to find creative ways to support the park through Friends of the Smokies,” said Don Collier, owner of Collier Wineries, which includes Sugarland Cellars. “We owe so much of our livelihood for businesses in the area due to the park.”

Sugarland Cellars has been a sponsor for other FOTS events, including the Alum Cave At-Home Adventure and the Greenbrier Barn Party, and Sugarland Cellars was the wine auction underwriter for the Evergreen Ball in 2011.

This year’s Dance of the Firefly wine with the “Summer Moon” art label is on sale now online and at Sugarland Cellars in Gatlinburg, with $5 from each bottle sold at the store donated to FOTS.

If you purchase Dance of the Firefly wine at the Firefly Celebration at the Tino Gallery, 100% of your purchase will be donated to FOTS.

Part of what makes the Firefly Event special for Mary John is sharing the house that is the gallery with others. That house was her grandparents’ home.

The house was built in 1844 by John Andes and renovated in the 1880s by Lewis C. Buckner, a wood artisan, master cabinetmaker and former slave in Jefferson County.

“With the gallery, we have two artists,” Mary John said — Robert Tino and Lewis Buckner. “Lewis Buckner did all the carvings on the mantle and all the gingerbread work. It’s a daily celebration to have the gallery open to the public. It’s great to carry on his legacy.”

The Tennessee State Historical Society installed a plaque outside the gallery in 1999 to honor Buckner’s work.

Mary John’s father, as a child, moved into the house in 1940 with his parents. Mary John explained that her grandparents had been displaced from their previous home when TVA dams put their home, and the homes of most of their relatives, under water.

“This was the house they found. It wasn’t painted and was in poor repair,” she said.

The family worked on restoring the home and her grandmother became “so proud of it.”

Mary John said her grandmother enjoyed sharing her home with others. She would have 45 guests for Thanksgiving dinners. When local motels ran out of rooms, they would call Mary John’s grandmother to see if she would let a couple stay for the night – and she would.

“My heart definitely is in this location,” Mary John said. “It’s a pleasure to have a business in the house so we can continue the tradition of opening the door to others. I’m the third generation to be able to open the door and say ‘come in and enjoy my home,’” Mary John said.

“We’re excited that we are able to host the event,” Mary John said.

“There’s an energy with the people who come to celebrate with us,” she said. “Everyone is excited to attend, to see what the new print is, to see the new label, and to visit with others. The firefly celebration is a different kind of visit to the gallery, as people linger to talk.”

As a child growing up across the road from her grandparents, Mary John visited them every day and enjoyed being part of the farm life.

She remembers the days before the commercial development along Highway 66 when the fields around the house were filled with fireflies at night.

“Fireflies are magical,” she said. “As a child when you see them in a yard, they are magic, lighting up the landscapes. Seeing fireflies bring out the child in you.”

Directions to Robert A. Tino Gallery

You’ll see the Tino Gallery from Highway 66 on the outskirts of Sevierville. Getting to the gallery can be challenging. The Gallery is next to a shopping center with PetSmart and Dick’s Sporting Goods. Turn at Krispy Kreme, drive to the end of the road and turn left. You’ll be on Old Douglas Dam Road that runs beside the gallery.

Attire for the Firefly Celebration

Mary John suggests wearing attire for a summer day outside, including comfortable shoes, cool clothing, and a hat. The event will be held rain or shine.