Friends of the Smokies is hosting the Friends Across the Mountains Telethon on Wednesday, August 14, to raise funds for the Great Smoky Mountains National Park. 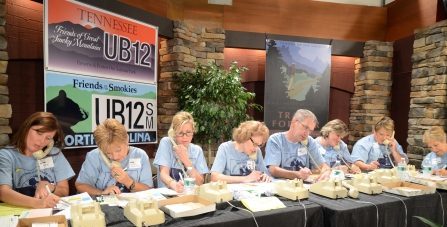 Volunteers take donation calls during a previous FOTS telethon. This is the 25th year for the Friends Across the Mountains Telethon.

The telethon will be broadcast live on WBIR Channel 10 in Knoxville and WLOS News13 in Asheville, from 7 to 8 p.m.

This is the 25th year of the telethon, which has raised more than $3.6 million to support GSMNP.

The goal for this year’s telethon is to raise $250,000 to support the park’s programs and projects, including an upgrade of the park’s emergency radio communications system.

If you live outside of the viewing areas or aren’t available to watch the telethon, you still can participate.

Donations can be made before the telethon airs by visiting the FOTS website at FriendsOfTheSmokies.org/donate.

Thanks to WBIR Channel 10 and WLOS News13 for being loyal partners for FOTS.