The Appalachian Trail (A.T.) is one of the longest hiking-only trails in the world – 2,193.1 miles, from Springer Mountain in Georgia to Katahdin in Maine. The A.T. runs for  71 miles through Great Smoky Mountains National Park, from Fontana Dam to Davenport Gap. 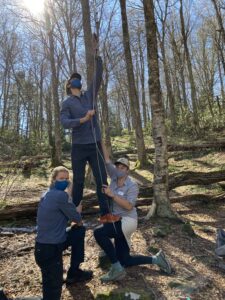 A key part of maintaining the A.T. are Ridgerunners — seasonal employees who hike assigned sections of the A.T. to help educate hikers, check permits, and assist in the maintenance of the Trail, shelters and privies.

The 2021 Smokies Ridgerunners for GSMNP  are Yael Girard, Amelia Cary and Ricky Vandegrift — from left to right in the photo at the top of this post. The photo was taken during pre-season training in February 2021.

“Every hiker who hikes on the A.T. benefits from something the Ridgerunners have done,” said Christine Hoyer, GSMNP Backcountry Management Specialist, who co-manages the Ridgerunners for the Park.

“The A.T. is the most used corridor in the Park and gets a real range of hikers – from day hikers who want to put their feet on the Trail to thru-hikers (hikers doing the complete A.T. in one calendar year) to hikers doing a section of the Trail,” she said.

Hoyer explained that the Park cannot focus solely on the A.T., so the Ridgerunners are hired to help manage visitor use of the A.T.

“Ridgerunners are a really important presence on the A.T.,” Hoyer said. “They engage with visitors and do all kinds of maintenance on privies and shelters. They are our eyes and ears on the A.T. and our conduit for action.”

Coordinating the Smokies Ridgerunners and maintaining the A.T. in the park is a collaborative effort of GSMNP, the Appalachian Trail Conservancy (ATC) and the Smoky Mountains Hiking Club (SMHC).

“We work in concert with each other,” Hoyer said. “It’s kind of extraordinary how well it works.”

The A.T. section in GSMNP — including Charlies Bunion, Rocky Top and Mt. Cammerer — has 13 overnight camping sites (12 shelters and one campsite) and seven privies.

“The Ridgerunners need a range of skills in their A.T. work,” said Chloë de Camara, ATC Trail Education Specialist who oversees the management of the Ridgerunner program for the ATC. 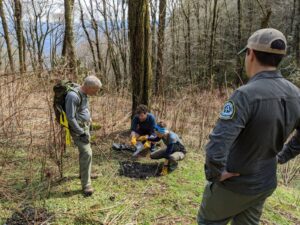 The Ridgerunners interact with hikers — providing education on a range of backcountry issues, such as correctly using the food hanging system at shelters and not building illegal fire rings.

They check hikers’ backcountry overnight permits. They collect data on hikers and wildlife incidents, and sometimes even assist with evacuations. So far this year two of the Ridgerunners have evacuated hikers in distress.

They also report repair work that is needed for shelters or privies, which is then completed by the Smoky Mountains Hiking Club (SMHC).

For any trail or facility damage, Ridgerunners take photos and determine GPS coordinates. They relay that information to Hoyer, who then coordinates with SMHC to handle trail and shelter repairs.

“There’s a lot of communication, including phone calls and text messages,” Hoyer said.

The Ridgerunners are trained in how to use the Park radio and call from on and off the trail – reporting bear activity or hikers who need help.

Guidelines for using the A.T. changed in 2020 due to COVID-19. The A.T. never was completely closed because there are thousands of access points to the trail. The shelters on the A.T. were closed, and hikers were asked not to do long-distance hikes along the A.T.

During 2020, there was concern about hiking on the A.T. because the number of deaths nationally due to COVID-19 and the fact that hiking the A.T. promotes interstate travel, with hikers not only being on the trail but also hiking into towns along the trail. Appalachian Trail Conservancy (ATC) used its outreach to encourage only day hiking and to ask hikers to follow CDC guidelines regarding social distancing and face covering.

Both de Camara and GSMNP’s Hoyer said Ridgerunners have reported aggressive behavior by a handful of A.T. hikers during the 2020 and 2021 seasons. Some hikers have been rude to Ridgerunners when they were asked to comply with park policies or CDC guidelines.

An important part of the Ridgerunners’ work in the Park is maintaining the seven privies along the A.T. in the Smokies. 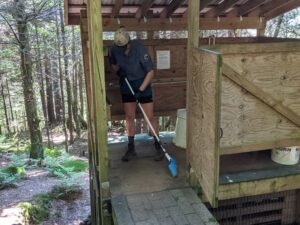 These moldering privies are an improved method of composting human waste versus a pit privy. With a moldering privy, mulch is deposited into the bin under the toilet seat. The mulch promotes decomposition of human waste.

The Ridgerunners monitor the level in the bin and, when the space in the bin is filled, they move the toilet seat onto another bin.

Ridgerunners monitor the amount of mulch at each privy and work with GSMNP and the Smoky Mountains Hiking Club to have the mulch resupplied.

Phyllis Henry, the Smoky Mountains Hiking Club liaison with the Park, explained the club’s role in helping maintain the privies.

Leveling waste and mulch is one of the duties of Ridgerunners in maintaining the privies. Photo – Chloë de Camara/Appalachian Trail Conservancy

The Club’s A.T. Maintainers Committee leads mulch trips to resupply the privies. That involves club members hiking to the privy locations, with each hiker carrying 20- to 40-pound bags of mulch. For remote shelters that are eight or nine miles from the trailhead, horses or helicopters are used to transport the mulch.

For the privies to be able to compost effectively, only human waste should be deposited in the privy. Anything else that is deposited into the privy – from food to discarded clothing — has to be removed and carried out by the Ridgerunners or SHMC members who help to maintain the privies.

“It’s just unbelievable what people put into the privies,” Henry said. “What surprised me the most was at Mt. Collins. We found a huge blanket that would be from a bed that had been stuffed down in the privy. We had to fish it out, put it in plastic garbage and carry it out.”

[An upcoming blog post will provide more information about how moldering privies work and what’s involved in maintaining the privies.]

ATC’s de Camara explained that food thrown into the privy can cause problems for wildlife.

“Bears are drawn to food trash, even if it’s stuff in the privy,” she said. The bears then damage the privy as they try to get to the food.

That damage has to be repaired.

“Smoky Mountains Hiking Club has the responsibility for maintaining the shelters and privies on the A.T. in the Smokies. Most people don’t know that it’s done by volunteers,” Henry said. 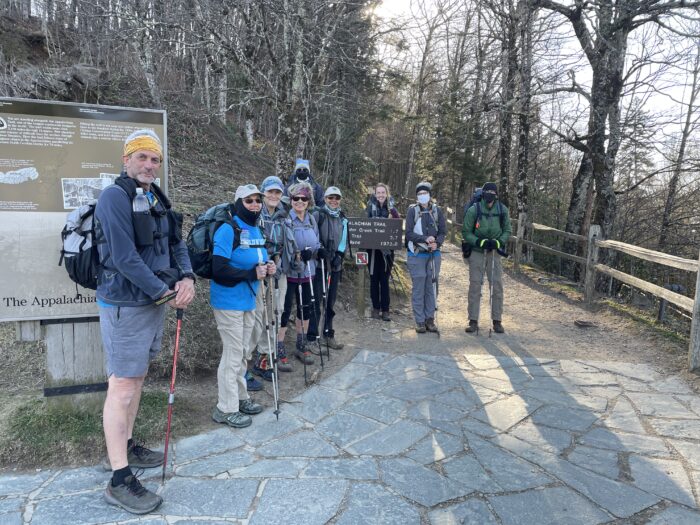 Lack of understanding about camping in the backcountry is a major concern, Henry said.

“The biggest thing about the Ridgerunner program is the educational aspect,” Henry said. “The Ridgerunners are teaching people how to be respectful of the backcountry, how to keep backcountry clean, and what Leave No Trace means.”

“There are so many first-time users who go into the backcountry with no idea of what they should do,” Henry said, who was the ATC’s Volunteer of the Year in 2005. “They think that if they leave their trash that someone will come along and carry it out for them. Ridgerunners play a very important role in maintaining the backcountry and in educating hikers.”

The job of the Ridgerunner is both demanding and rewarding.

“The job is not for everybody,” said Henry, who serves on the committee that interviews and selects Ridgerunners. 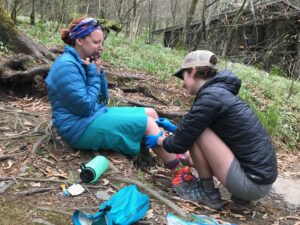 “They have to work with the privies — and that certainly is not pleasant,” Henry said.

“Communication skills are at the top for them. They have to be able to communicate with people effectively – explaining what the rules and regulations are and the guidelines of Leave No Trace. Carrying out trash – left over gear. The job is physically demanding. It’s a tough job,” Henry said.

So what makes people want to be Ridgerunners?

“The love of the outdoors and being in the backcountry,” Henry said. “A lot of them have been thru-hikers or want to give back in a way.”

About 70 people apply for a total of nine positions in Tennessee and Georgia — three positions in GSMNP and six in Georgia. Applicants must submit a résumé, cover letter and two references. Using the application materials, de Camara creates a spreadsheet, including each applicant’s information, such as medical training, education, and winter hiking and backpacking experience.

“We want people who can be on the job while they’re out there,” de Camara said. “They need to be in a work mindset and not a recreation mindset. We’re looking for someone with education or volunteer experience working with people – someone who has been able to change people’s behavior without using enforcement.” 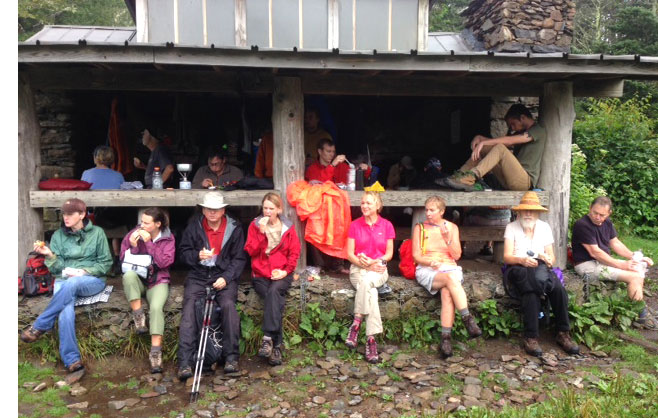 Hikers on a FOTS hike to Charlies Bunion stopped to have lunch at the Icewater Springs Shelter, illustrating the volume of day hikers using shelters on the A.T. Packing out one’s trash is important for every hiker. Photo – Julie Dodd

The top candidates are interviewed by de Camara, Hoyer and Henry. Part of the interview involves candidates explaining how they would handle a variety of scenarios that could happen on the A.T.

“I’m listening for them to explain ‘what would you do?’” Henry said. “Lots of people break rules, and there will be verbal exchanges. The Ridgerunners have no law enforcement authority. They can be miles from the trailhead. It’s all on how they can communicate with hikers to get their cooperation.”

The seven-day training for the Smokies and Georgia Ridgerunners is in February and includes wilderness first-aid training, practicing scenarios, and orientation to A.T. management. The training also includes how to de-escalate confrontations. That de-escalation training has been needed even more during 2020 and now.

When Ridgerunners explain Park regulations or ATC guidelines to hikers that guidance sometimes “wasn’t well received” by some hikers, de Camara said. The training for Ridgerunners provides them with as many tools as possible for de-escalation.

[For information on applying to be a Ridgerunner, check out the ATC careers page. Applications are accepted starting in September, with interviews starting in November.]

The turnover rate for Ridgerunners is high, de Camara said. Most Ridgerunners typically don’t stay in the job for more than two years.

“It’s a physically demanding job,” de Camara said, who was a Ridgerunner for three years in GSMNP before working with ATC.

“Some days the sky is blue and the temperature is in the 60s,” de Camara said about the good days for Ridgerunners. “Then other days they have to clean lots of privies – pulling out soiled underwear – and cleaning a shelter they just cleaned the week before. It can make the Ridgerunners become jaded by the end of the season.”

To help support Ridgerunners’ work, de Camara encourages hikers on the A.T. to acknowledge them by striking up a friendly conversation and saying thank you.

“They are the heart and soul of the A.T., along with the volunteers,” de Camara said.

She encourages hikers to be more responsible for themselves, packing out their own trash (including food items like orange rinds and banana peels) and other people’s trash.

She stressed that Ridgerunners have dozens of responsibilities and that picking up other people’s trash is an extra task.

“Ridgerunners are one of the most important and under-appreciated resources,” de Camara said.

SMHC’s Phyllis Henry said, “If everybody would just help out. If you see garbage left in a shelter, then pack it out. We’ve all got to work together to make it work and make it better for all users.”

Help support the Ridgerunners by making a donation to Friends of the Smokies. 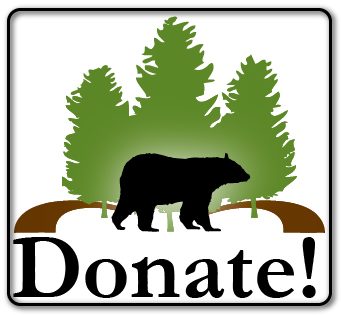