GSMNP high school summer intern Joseph Vazzana explains how rangers and interns identify insects, using a specially designed refrigerator trap to chill the insects. Vazzana was one of 16 interns who participated in the program.

To start our study of insects and wildlife, we met at the Twin Creeks Science and Education Center in Gatlinburg and discussed the day that was laid out before us.

Interns and researchers split into groups to go over our plans and tasks. 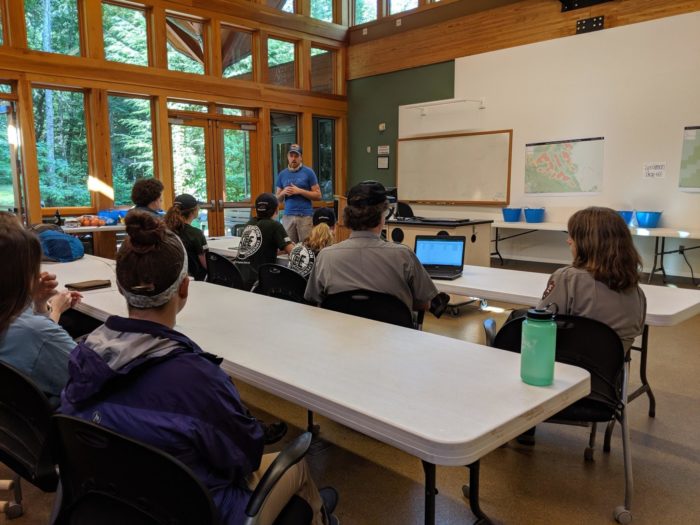 Interns met with rangers at the Twin Creeks Learning and Research Center to plan our activities for the day.

One crew went to locate a nearby burn zone within the park near Twin Creeks. This burn zone was impacted by wildfire during the Chimney Tops 2 Fire in November 2016.

The team assigned to the burn zone investigated, identified and documented forms of life that were returning to and thriving in the burned area. The photo at the top of the post was taken of a snail in the burn zone.

A second crew went on a short hike to collect data, identify and analyze bees and other invertebrates using traps. 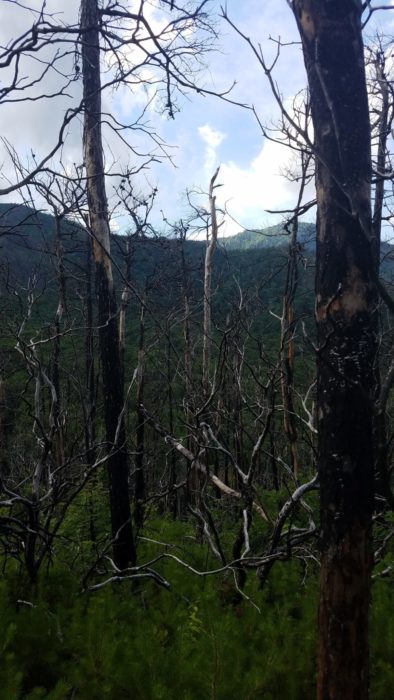 A burn zone near Twin Creeks Learning and Research Center was the location for a survey of wildlife returning to the area.

Originally, I was with the team that was designated to go to the burn zone. However I ended up working with the research coordinator of the park, Paul Super. Our job was to investigate a moth trap in the forest and identify all invertebrates trapped inside.

As assistant to Paul Super, my first job was to help him locate the moth trap site located next to the research center. This location allowed us to use electricity during our work by using an extension cord from the Twin Creeks building.

This was important because we used electricity to power a refrigerator trap that collected and chilled the invertebrates we were studying.

The trap consisted of a miniature fridge with a hole drilled into the top. The hole was connected to a metallic funnel, which housed a UV non-kill light.

This light attracted moths and other insects into the funnel, which led to the fridge.

Once in the fridge, insects were chilled to a temperature that slowed their metabolism to a sluggish, almost sleep-like state.

We removed beetles and snails carefully from inside the refrigerator trap and identified the species we caught. After identification, these invertebrates were released back into the forest.

We then packed up the equipment and carried it back to the research center for inspection of the remaining insects within the refrigerator trap.

Once the unit was back at the research facility, I set the trap on a picnic table nestled in the shade to reduce stress to the insects. 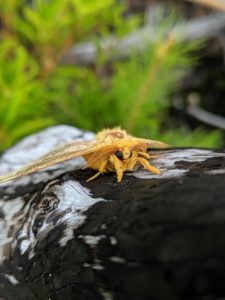 This moth, a relative of the Rosy Maple Moth, is one of the many exotic-looking moths that lives in the park.

Using field guides, Paul Super and I identified moths by observing wing patterns, thorax thickness, and any other identifiers.

I was shocked to discover that the Smokies is home to the Rosy Maple Moth and many of its other close relatives!

I never imagined that something quite so exotic looking lived in the Smokies.

Paul Super informed me that the Smokies is home to many exotic and fascinating looking insects that most wouldn’t believe are here.

When all was said and done, we packed up and called it a day!

From this experience I learned that although sometimes you don’t get what you originally want or expect, you may end up experiencing something even more rewarding.

Although I initially want to explore the burn zone, working with Paul Super ended up being a great experience.

I have learned to take new experiences with open arms and be open to what these experiences offer!

It was a privilege to work with Paul Super and the rest of the researchers at Twin Creeks.

This experience really showed me the beauty and vibrance of even the smallest living things in the Smokies.

Several of this summer’s interns have written guest posts and compiled photos of their experiences for the FOTS blog. All the photos in this post were taken by the Tennessee interns.