The FOTS May Classic Hike of the Smokies was the Cataloochee Valley Loop, including Rough Fork, Caldwell Fork Trail and Fork Ridge Trail. The hike leader was Mike Knies, who has marked over 1,200 home sites in the park, maintains a section of the Appalachian Trail near Davenport Gap, and has written numerous stories about adventures in GSMNP.

Thirty hikers met at the Rough Fork Trailhead for our Friends of the Smokies trek for the May Classic Hike, on May 14.

Classic Hike of the Smokies group photo. All photos by Linda Spangler

You could call the effort the Three Forks Hike, as in addition to Rough Fork we would continue on Caldwell Fork Trail and then complete the loop on the Fork Ridge Trail.

The weather was ideal with a start temperature of 45 degrees and a few clouds in the beautiful mostly blue sky.

Scout had reported numerous blowdowns across the trails, but we lucked out as the Park had trail crews working hard in Cataloochee that week. We saw two crews, and because of their efforts we only encountered a couple sections of the trail that were challenging due to downed trees.

Since we had had so much rain this spring and even more the preceding weekend, a few normally minor trickles that are easy rock hops did require getting our feet or at least our boots wet — but no real problem.

A mile up the trail after three bridge crossings, we reached the Steve Woody place, which is one of the few remaining structures in Cataloochee. His grandson, also named Steve, is very active in Friends of the Smokies. 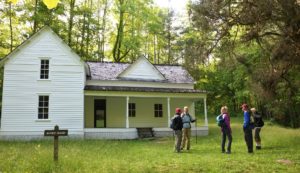 Steve Woody’s house illustrates that not all residents in the mountains lived in log cabins.

The house is frame a good example that all the residents of the mountains did not live in log cabins and engage in subsistence farming.

“Uncle Steve,” as he was called, was reportedly engaged in getting the current school house in Cataloochee built.

In 1839, the North Carolina legislature mandated that every county must furnish school houses for the education of its children.

The people of Cataloochee were dissatisfied with the building, and a delegation, including Mr. Woody, was send to the Haywood County Commissioners to request funds for a replacement.

For whatever reason, possibly because there weren’t that many votes in the area, the Commission refused. Shortly thereafter a fire mysteriously broke out and burned the schoolhouse down.  So the County was obligated to replace it.

Mysteriously all the books, desks, and such had been removed before the fire!!

Shortly beyond the homesite, the trail begins a gentle grade. Right at the top a very large sourwood tree sits on the right hand side.

In the more rugged areas of the Park, the former residents relied mainly on sleds pulled by mules to get heavy loads moved. The trails were too rocky and rough suffering from constant erosion for wagons. Wagons were expensive, prone to breaking down and complicated to fix. 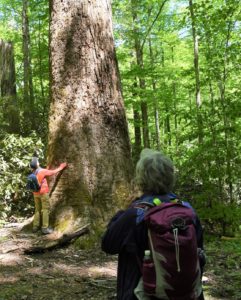 This poplar tree measured more than 20 feet in circumference.

So settlers used the limbs of sourwood trees, which often had a natural curve for the runners and a twisted grain that made them almost impervious to splitting.

The sourwood tree is oddly related to azalea, rhododendron and mountain laurel. The name reportedly comes from the sour taste of the leaves that people used to chew when they didn’t have tobacco.

We started down from our first peak, departing from the Rough Fork Trail for the Caldwell Fork Trail and passed a huge buckeye tree that seemed out of place as they normally are beside or even in the middle of mountain stream.

A bit later we passed a large Basswood with the notable sprout extending out all around its base and then a bunch of Silverbells, whose patchy bark always reminds one of Adirondack shingles.  A few fence posts still remained as evidence of prior resident farming.

We took a short detour to have lunch in front of a massive poplar tree that we unofficially measured at more than twenty feet around.

We crossed Caldwell Fork on a bridge, passing a work crew.

At the intersection with the Double Gap Trail, a pile of rocks on the left side and a deep pit covered now in vines and weeds were all that remained of a home place occupied by a Sutton and then an Allison family.

The area was called “The Deadings” because of the method used to kill the trees by girding the bark before removing the trees for farmland.

Crossing Clontz branch on tip toes, we passed the spot where Jim Evans had a blacksmith shop.

At the intersection of the trial with the McKee Branch Trail, we went up that path for a few hundred feet to visit the former home site of Jesse McGee. The stream is named for him, but the Park Nomenclature Committee got the spelling wrong. 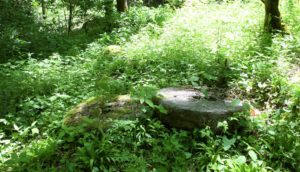 His place is notable for the size and the fact that the house had three chimneys. All that remains now are three piles of rubble and the pit for the root cellar, which is almost invisible among all the weeds.

The place sits in a “walnut clearing.” There were about a dozen walnut trees. Their roots secret a poison that keeps any other trees from growing around them, creating an opening in the forest.  The residents used the walnuts husks for stains and fed them to hogs.

On a barely discernible path leading to the McGee Cemetery across the stream, two mill stones remain from a grist mill that Jesse operated. His wife, Nicie, had a duck pond where they kept geese and ducks and beside the meat, they used the feathers for pillows and bedding.

We crossed the big bridge over Caldwell Fork, starting on the Fork Ridge Trail, passing the site of the Caldwell Fork School and then the end of the Old Settlers Trail that ran steeply up the ridge. 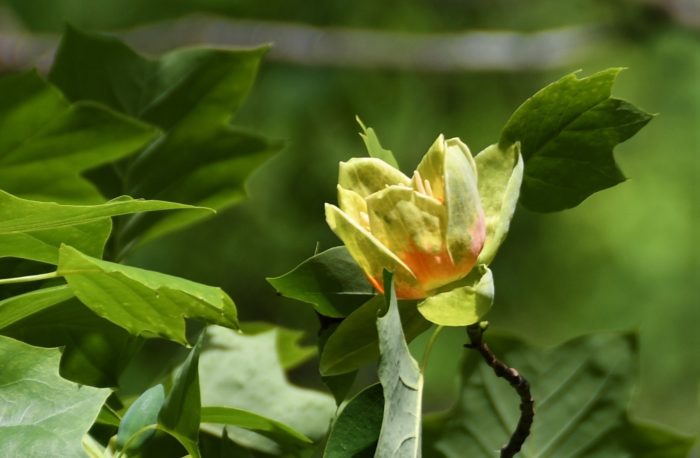 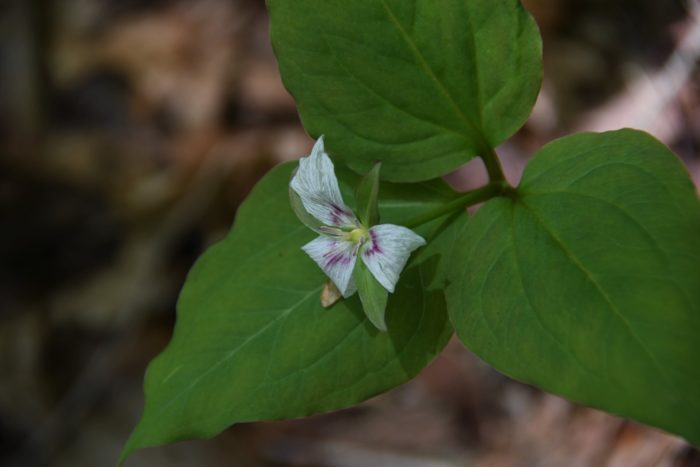 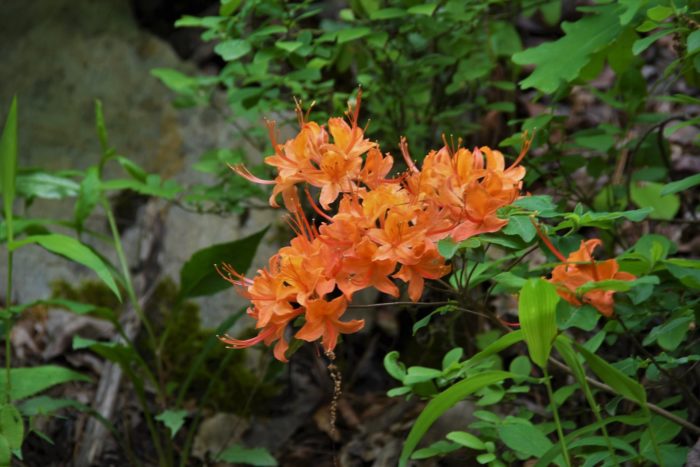 The current trail was built by the Civilian Conservation Corp and is much friendlier to today’s hikers. In the old days they believed in the using the shortest distance between two points rather than switchbacks.

We spread out a bit on the climb so that everyone could move at their own comfortable pace. Over the top the trail is level for a while proceeding out to a point that must have had a wonderful view up and down the valley before the trees took back the land cleared by logging and farming.

On the way down we passed by the former elk enclosure. The Park fenced off five acres of land for the initial introduction of about 20 elk to see how well they could adapt to new surroundings and forage.

Originally, the fence was about ten feet high with an observation platform, but that has now been totally removed. There a number of much smaller elk exclosures in the woods to measure the impact of the elk.

We passed the former home site of James Caldwell, which is notable having a cedar tree still living next to the house. While cedar trees grow throughout the southeast, the only ones in the Park are found next to old home places.

It is believed that in addition to providing year-round shade that the cedar trees helped reduce the amount of insect infestation and that the limbs may have been placed with clothing to keep moths way.

Another 1,000 feet and we crossed Cataloochee Creek back to the start.

It had been a wonderful day with perfect weather few trail obstructions and a lot of history!

The June Classic Hike is the Gatlinburg Overnight Experience, a two-day event on June 25-26. The experience includes hikes, lodging at the Buckhorn Inn, and a special presentation on the state of GSMNP.

Funds from the overnight experience will be used for suppression of the hemlock woolly adelgid infestation and treating high-use areas that are impacted by the emerald ash borer, another invasive species.

Those who register should be prepared to hike at least six miles and climb more than 1,500 feet on challenging terrain.

Visit hike.friendsofthesmokies.org for more information and to register.