Monitoring elk with telemetry was one of the skills the GSMNP high school summer interns learned during their six-week internship. Hunter Hicks explains the experience the interns had tracking down elk calves.

We went to Cataloochee Valley for elk monitoring.

There, we learned what rangers do to monitor elk and why they monitor them. We also learned not only about elk themselves but how the rangers track the elk down.

Wildlife technician Nick Melton taught us about the elk.

One of the first things we learned was that to monitor the number of elk calves that live to adulthood, the rangers put a radio collar around the calves’ necks to track them down later.

We were then taught about telemetry and shown the antenna and receiver used to track down collared elk. The photo at the top of the page is of the interns working with seasonal ranger Brandon Garcia to learn to use the telemetry equipment. 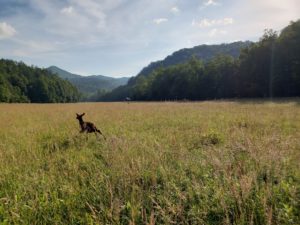 The first elk calf the interns tracked down ran to find a new place to hide.

After being shown the tracker, we were shown where an elk calf would live while it grew.

We used the tracker to get close to find the hidden elk.

After learning about the field work, we had a chance to try it hands-on. We learned how to determine where a calf might be by using telemetry.

To practice, we drove to an area visible on our map and then listened to which direction the tracker would beep the loudest. The loudest direction indicated the direction of the collar.

We then would draw a line on our map in the direction of the collar. We then repeated this another two times until we had a triangle on our map.

When we did it correctly, we knew that somewhere inside our triangle was the elk.

Once we made our triangle, we followed the radio signal tracker beeping until we found the elk lying hidden in a field of tall grasses.

This day was very special to me. I learned a lot of new skills that I can apply later in life.

Working in the field gave me a better understanding of what I could do in the future.

After going to college, I hope to pursue a career in biology. So this day helped me understand my future options.

Several of this summer’s interns have written guest posts and compiled photos of their experiences, which will be published on the FOTS blog. The photos in this post were taken by the Tennessee interns. 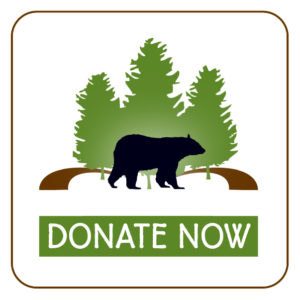